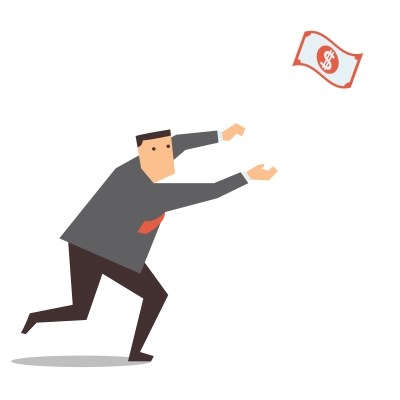 Over the past five years, US stocks have trounced foreign stock performance. In case you are now considering a reduction in your foreign stock holdings, let’s take a moment to examine performance-chasing and the benefits of global diversification.

Sensible investors pursue diversification as a policy to reduce risk, not as a tactic to chase performance. By following a disciplined policy of maintaining a well-diversified set of portfolio exposures, regardless of market zigs and zags, investors establish conditions for long-run success. In fact, when taking market conditions into account, investors increase the odds of success by diversifying into asset classes after they suffer poor performance. In any case, foreign equities provide an important tool for reducing portfolio risk without sacrificing expected returns. – David Swensen, Unconventional Success: A Fundamental Approach to Personal Investment 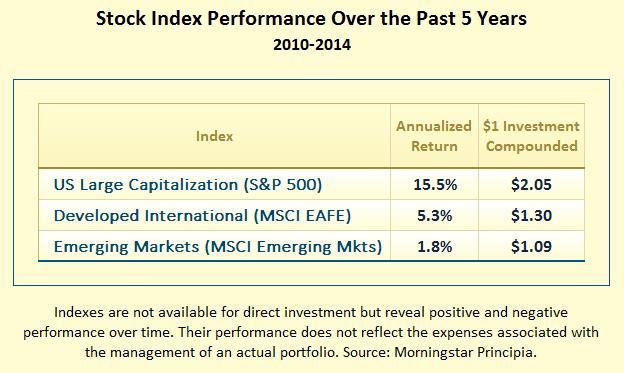 Years of strong US performance, shown by the orange bars on the chart below, are typically followed by sharp drops in foreign stock fund ownership and vice-versa, shown by the blue bars on the same chart. The recent 2008-14 period, – where foreign stock fund allocations remain remarkably steady despite poor foreign performance – marks an exception. Time will tell whether this apparent new found investor discipline will remain. 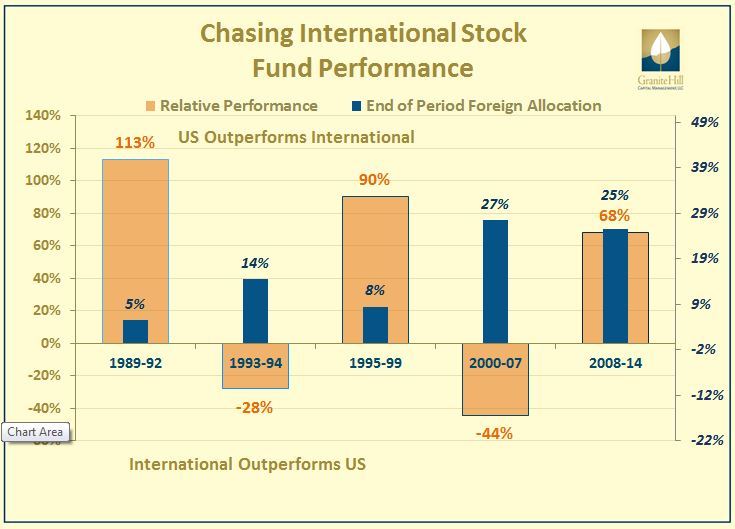 Graph translation: After strong US performance, investors added to US allocations (1989-92 & 1995-99) and reduced international stock allocations. Conversely, after strong international performance (1993-94 & 2000-07), investors increased their international allocations and reduced US holdings. Foreign stock ownership remained strong during 2008-14. Remarkably, the seeming stability in foreign fund ownership since 2000 shows that investors appear to have remained resolute, even though US funds have outperformed as revealed by the last set of bars. A detailed description of the graph follows at the end of this post.

This means spreading your holdings over several types of investments (including foreign stocks), assigning percentage targets to each type in the composition of your overall portfolio, and then maintaining said percentages through your investing plan. This can efficiently be accomplished through “Rebalancing” (previously discussed in this post), which is the opposite of market timing.

Taking market conditions into account to increase the odds of success.

One way of assessing market conditions is to review fundamental measures of value. High dividend yields, low price to book, and low price to earnings ratios may lead to realizing higher returns in the long-run. In practice, these ratios are poor short-term timing indicators, and their successful long-term implementation is by no means assured. Given those limitations, international valuations appear to be more favorable than US valuations – as shown by the comparisons between two Vanguard Index funds:

The risk reduction attributes of foreign stock diversification were covered in Diversifying internationally: “Is it safe?” While internationally diversified portfolios do not offer protection in market meltdowns, they recover more quickly, reduce long-term losses, and protect against catastrophes. Over the long-term, the expected returns of developed international stocks are comparable to those of the US. Since 1970, US stocks have compounded at 10.5% annually, 1.5% above developed international stocks at 9.0%. Given the sensitivity of returns to start and stop dates, not too much should be read into the 1.5% difference. Relatively higher rewards from foreign holdings, if realized, would cause the differences in a portfolio to recede.

Not chasing performance can be hard.

The combination of poor coverage of overseas economic news with the anxiety caused by downright crummy foreign stock performance can be understandably hard to ignore. But, paring back foreign holdings at this point would only serve to lock in the poor performance and damage the long-term growth potential of your portfolio. Evidence shows having a plan, taking the long-term view, and remaining disciplined is the best formula for achieving your goals.

Reach out if you have questions about how well your international stock funds are diversifying your portfolio.

Detailed description of the graph