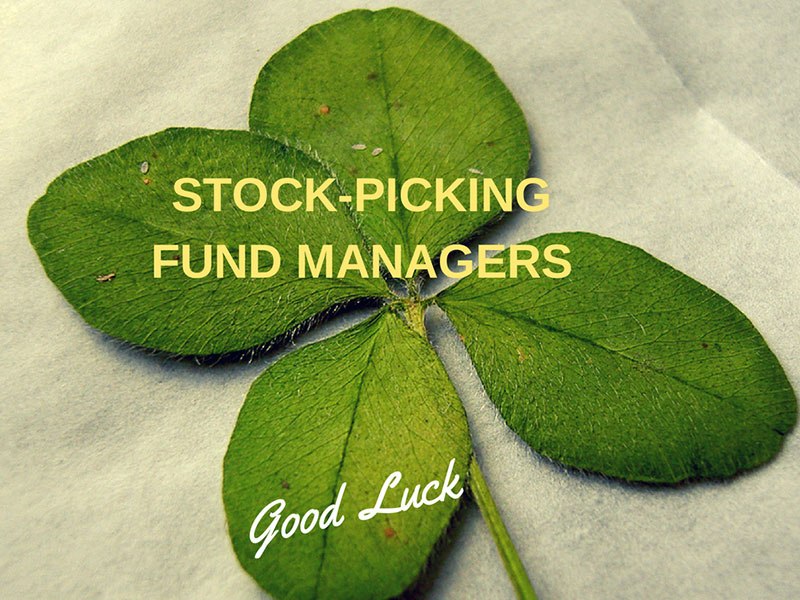 Skilled fund managers should easily identify stocks as too cheap or expensive, or so you might think. They don’t, as the New York Times article entitled, “Who Routinely Trounces the Stock Market? Try 2 Out of 2,862 Funds,” points out. Is the failure rate for active stock funds really so high? If so, what are the implications for how you invest?

On the failure question, it depends on how you define failure.

When defined as performing in the top 25% each year over five years, fund managers actively picking US stocks typically fail. Only two funds performed consistently in the top 25% during April 2009 to March 2014 (Table 1 below) which works out to 0.07% leaving 99.93% to underperform. History back to October 2004 shows only occasional bursts of success when more than one or two funds outperformed.

If one defines success as performing better than 50% of the competition each year for five years, then active managers succeed only 2.22% of the time on average. You would have better odds of flipping heads five times in a row (3.13% probability) than of performing in the top half. 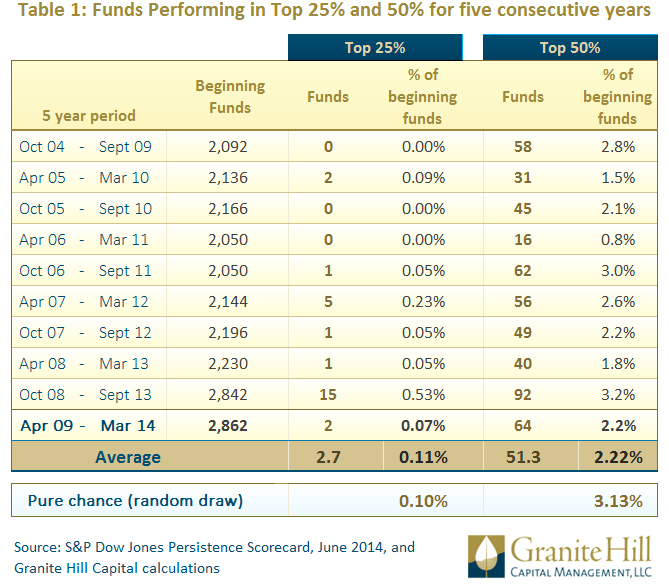 Five times in a row is a high bar when competition is stiff. Cumulative performance is what matters, but again, active fund managers perform poorly. Less than 14% of funds remained in the top quartile after five years. Over 28% dropped to the bottom quartile and 11% closed or were merged into other funds, as seen in the graph below. If results were governed by pure chance, there would be a 25% chance of staying in the top quartile. For active fund managers to fail so miserably suggests other forces are working against them. 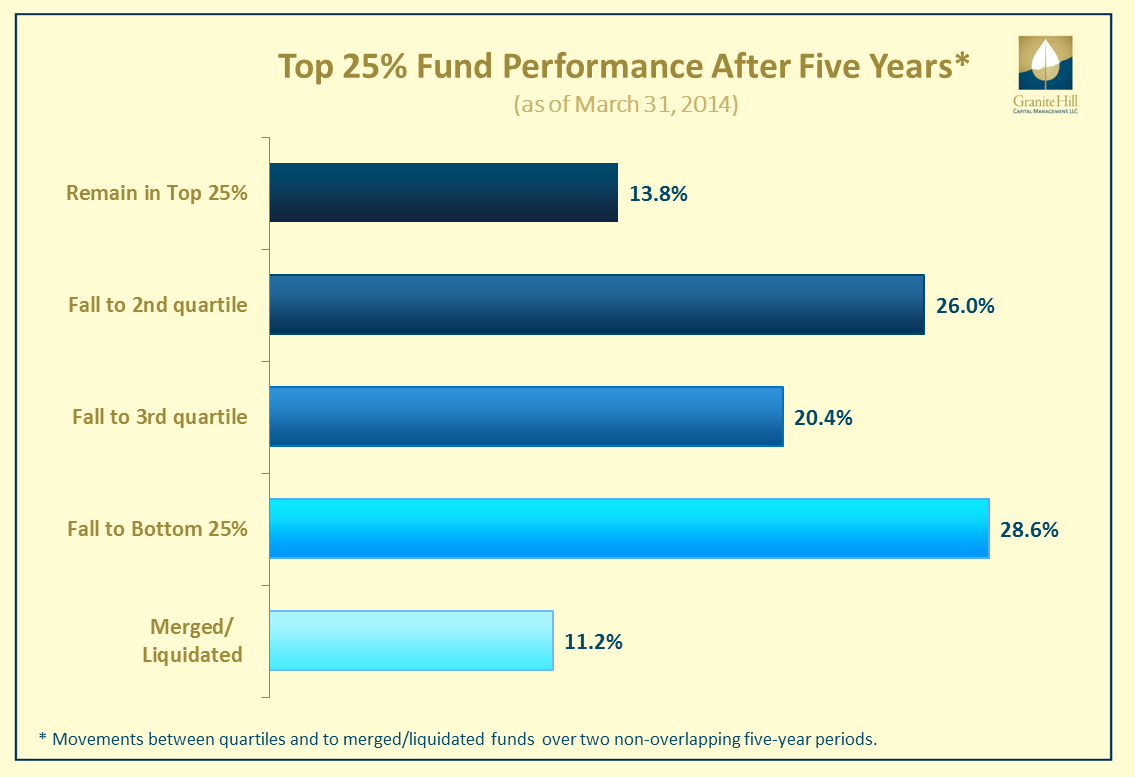 Why achieving success is so difficult: Intense competition among active fund managers searching for mispriced stocks ensures company prospects, adjusted for risk, are reflected in stock prices. This reduces the odds of consistently winning to 50/50 because for every well-informed buyer there is a well-informed seller. As a consequence,

Randomness plays a significant role in separating the winners from the losers. Ignoring the high costs of playing the active management game, after the contest closes, one-half of assets under management ought to beat the market and one-half ought to fall short. Because bets against particular stock managers offset exactly the bets for those same stocks by other active managers, final results fall neatly into either a winning column or losing column.” – David Swensen, “Unconventional Success: A Fundamental Approach to Personal Investment.”

Some active stock fund managers succeed. The Times article identified two funds consistently performing, year in and year out, in the top 25%. The Hodges Small Cap and AMG SouthernSun Small Cap Investor funds performed magnificently, gaining about 35% per year. That would make a $10,000 investment worth roughly $45,000 over five years. Their performance far surpassed the S&P 500 and more relevant small company benchmarks. The importance of benchmarks is covered in my previous post, Performance Envy Diminished by Better Benchmarks and Other Factors. 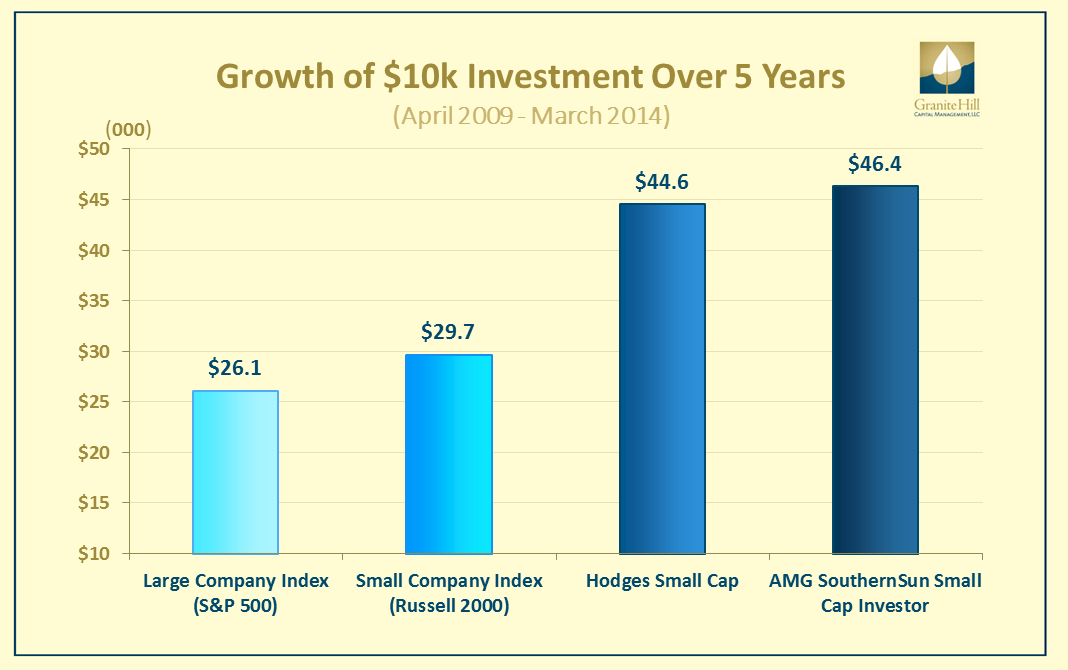 Can one easily identify winners in advance rather than after the fact? Using these two funds as a case study for picking funds consistently in the top 25%, it is hard when past performance is your guide. Aside from looking for 2 needles in a haystack of 2,862 funds, the two funds had limited history and/or poor performance.

The Hodges Small Cap “needle” was placed into the haystack in January 2008. According to Morningstar, its first year of performance ranked in the bottom 20% relative to other funds in its category, hardly indicating stock-picking skill. AMG SouthernSun’s Small Cap Investor performance from November 2003 to March 2009 was an annualized -3.6%—worse than the -2.8% of the Russell 2000 index of Small Cap stocks. Ditto on stock-picking skill. Yet for the period of April 2009 to March 2014, these managers chose superbly performing stocks and blasted the competition. Time will tell whether this outstanding performance will continue into the future.

Investment Implications: If the value proposition of your advisor, favorite newsletter, or other financial media source is choosing active fund managers able to outperform, think again about that advice. Compelling evidence shows that few active stock fund managers provide sustained superior performance and that identifying them in advance is quite difficult. More broadly, if you have not already, it is time to rethink the whole idea of active fund managers and focus on what you can control, including asset allocation, costs, risks, taxes, and investment strategy. See: Finding Your Inner Investment Alpha Dog for 3% Extra Performance.